"Lines Composed a Few Miles Above Tintern Abbey on Revisiting the Banks of the Wye During a Tour, 13 July 1798" 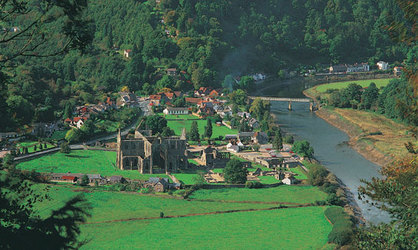 SETTING THE SCENE: "Five years have past; five summers, with the length/ Of five long winters!" It has been five years since Wordsworth last embraced the magnificent scenic views of the Wye valley but now after his long absence he is delighted to be back relishing the “beauteous forms” the landscape around Tintern Abbey has to offer. The poet seems relaxed and is at ease listening to the soothing sounds of this “secluded” countryside. He takes up a resting position beneath a “dark sycamore” tree and from this vantage point he can observe the small plots of land with cottages that seem to merge into the landscape. The green of the countryside runs right up to the doors of farm dwellings and puffs of smoke can be seen rising silently above the trees below. The scene causes the poet to think of “vagrant dwellers” living out in the open, at one with nature.

A LONG ABSENCE: In stanza two Wordsworth brings the reader back in time. He illustrates the important role that this countryside has played in his life throughout his five year absence. During this absence he never forgot the wonderful features and images the landscape had to offer and he describes three ways that they impacted on his life;

RECOLLECTIONS: Although they offered him sanctuary in times of despair, the poet's memories of the landscape had begun to slowly fade away over the last five years. However, as he surveys the valley after a long absence "the picture of the mind revives again" as "gleams of half extinguished thought" begin to come back to him. He is delighted to be experiencing the scenes around him once again and he knows they will stay with him and give him "food and life for future years". Yet this moment is tinged with a certain degree of sadness as the poet reminisces about his "boyish days" when he was impulsive and went "Wherever nature led". Five years ago he felt no need to understand nature on a deeper level nor attach any great significance to it, stating that "To me [nature] was all in all". The poet thus comes to the realization that he no longer experiences life with the same intensity -  the "dizzy raptures" of his youth are a thing of the past. Yet this thought ends this momentary sadness as he also notes how he has leaned to see nature differently - he has become more considerate and passionate towards nature which compensates for the loss of youthful ecstasy.

EXPERIENCES OF NATURE AS AN OLDER MAN:As a more sophisticated and wiser person with a better understanding of the sad disconnection of humanity, Wordsworth feels a deeper and more intelligent relationship with nature stating that he has felt  "A presence that disturbs me with the joy/Of elevated thoughts; a sense sublime". As he matures as a man, nature has become "the nurse/ The guide, the guardian of [his] heart", giving him moral instruction and protection when he needs it most. He is no longer detached from nature like he was in his youth, instead he is now very much aware of man's oneness with nature.

ADDRESSES HIS SISTER:  The poet suggests that even if he did not have such a profound relationship with nature and the world around him his cheerful spirits would not "decay". The reason for this is because his younger sister, Dorothy, has accompanied him on this retreat to Tintern Abbey - and this gives him great pleasure. Her excitement and joyfulness reminds the poet of his youth as he declares; "in thy voice I catch/The language of my former heart, and read/My former pleasures". Through her eyes, Wordsworth can see the wild vitality he had when he first visited this place, and this image of himself gives him new life. Wordsworth then shares his deepest hope: that in the future, the power of nature and the memories of himself will stay with Dorothy - and that they will be kept alive by Dorothy. At the end of the poem, Wordsworth combines their current setting with his sister's future memory of the moment. He is satisfied knowing that she will also carry the place, the moment, and the memory with her. He asks that she never forget how after five years absence from the area, he returned, and felt a greater love for the place.

THEME: Nature obviously…but more importantly nature as mentor, as the sublime and as a restorative power. Also the theme of memory, solitude/isolation, youth and maturity oh and the beauty of nature…we can’t forget about the “beauteous forms.”